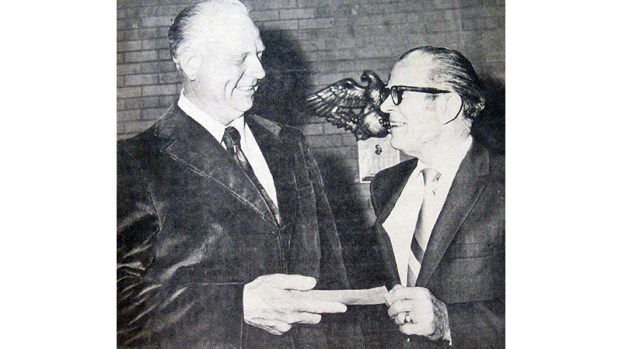 1972 – Manning W. Riser (left) manager of DuPont’s Ponchartrain Works in LaPlace, presents a check for $134,334 to Sheriff P.D. Hebert of St. John the Baptist Parish to pay his company’s tax bill to the parish for 1971. DuPont is the third largest taxpayer in St. John Parish. The Godchaux-Henderson Sugar Refinery at Reserve is the biggest taxpayer with Louisiana Power and Light Co., second. Following DuPont among the Top 10 taxpayers in the parish are South Central Bell, the Illinois Central Railroad, Kaiser Aluminum and Chemical Corp., the Bank of St. John, Gulf States Land and Industries, Riverlands National Bank and the Louisiana and Arkansa Railway. Tax collections during the month of December were the biggest in the history of the parish with approximately $933,000 collected according to the sheriff’soffice.