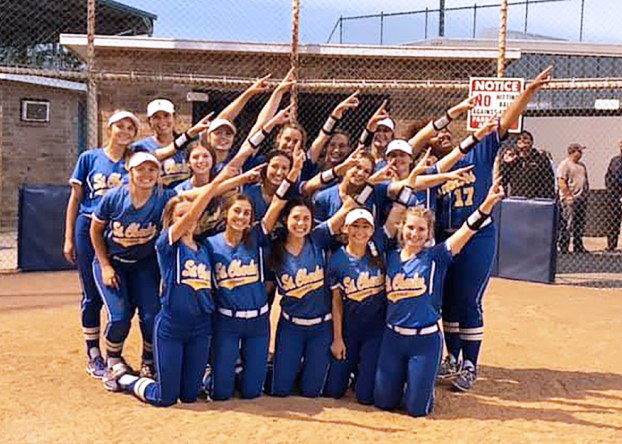 LAPLACE — The St. Charles Catholic Lady Comets softball team is sailing into Sulphur to compete against Notre Dame in the LHSAA Division III semifinals. The game will take place at 3 p.m. Thursday on Field 15 at Frasch Park.

If successful, the No. 5 Comets will advance to the championship game to face the winner of Thursday’s meeting between No. 3 Holy Savior Menard and No. 2 St. Thomas Aquinas.

The Lady Comets started off hot at bat with seven runs during the first inning of Tuesday’s game against Pope John Paul II. St. Charles Catholic busted the game open in the second and third innings with 11 runs and never looked back.

Senior Taylor Perilloux’s first career home run came at the perfect time. In the last minutes of her last home game, Perilloux hammered a grand slam to end the game 18-0.

“It was our last home game, so our seniors took pride in that part of it because they knew it was the last time they would be on the field,” Coach Ty Monica said.

Along with Perilloux, seniors Blakely Heltz, Sydnie Sims, Logan Falgout, Alyssa Hooge, Lauren St. Martin and Antoinette Chiarella had a lot to celebrate after Thursday’s 15-7 win over No. 4 Houma Christian in the Division III quarterfinals.

Monica said the quarterfinal game saw intense play from both teams. Houma Christian was on top 3-1 at the end of the first inning. St Charles Catholic closed the gap in the second inning and spent the rest of the game defending the lead.

“Houma Christian is a quality opponent. They swing their bats extremely well, and that scared me to death going into the game. We were up 14-4 in the sixth inning, and I still didn’t feel comfortable because that’s how explosive their line-up really is,” Monica said.

Sure enough, Houma Christian capitalized on a three-run homer in the sixth inning to keep the Comets on their toes. St. Charles Catholic maintained the lead and added a final run in the seventh inning to end the game 15-7.

“It was back and forth for the majority of the game. It was a fun game to be a part of as a fan,” Monica said. “The reality of it is that the game was a lot closer than what the score shows because of the way Houma Christian swings their bats and their offensive production.”

The Lady Comets seniors did not disappoint. Perilloux started in the circle and had a dominating performance with 11 strikeouts against a good-hitting ball club. Heltz went three-for-four at bat, Sims went two-for-three, and St. Martin had two solid hits. Chiarella struck a big three-run homer, the first of her career, at the top of the sixth inning to give St. Charles Catholic a 14-4 lead.

“Up until that game, the girls as well as myself weren’t too happy about the way we were playing. We haven’t done a whole lot correctly, which is one of the reasons we ended up playing Houma Christian,” Monica said. “I feel like we really responded and rose to the occasion. Like I told them at the end of the game, that’s what I’ve been expecting since day one. Better late than never. I was always worried we would go through the season without playing a well-played game. Yesterday, we did that.”

A new challenge lies just around the corner. The Lady Comets will face top-seeded Notre Dame, a team that holds the national record for high school home runs.

“They are well coached. They have very good players, and we’re going to have to keep their balls in the ballpark and hopefully find a way to score a couple of runs of our own,” Monica said.