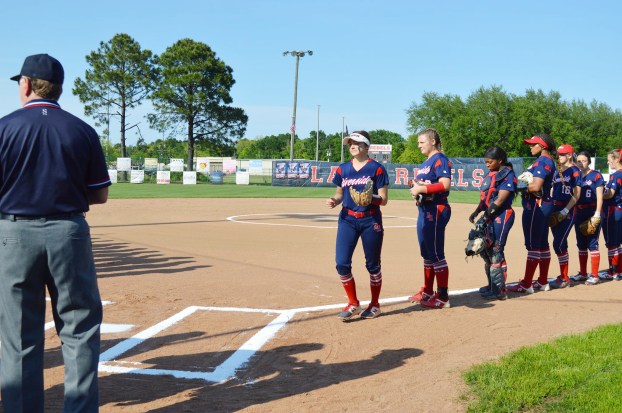 RESERVE — With a No. 12 ranking, the Riverside Academy softball team found itself in a David and Goliath scenario in the LHSAA Division IV playoffs. The Lady Rebels overcame the odds in the regional and quarterfinal rounds to forge a path back to the semifinals in Sulphur.

St. Frederick was the first to score last Tuesday. Riverside tied the game 1-1 in the third with a solo home run from Cameryn Loving, and the score held steady until the seventh inning.

At the top of the seventh, Riverside got a runner on base just in time for Cara Campbell to hit a walk-off and end the game 2-1.

Emily Vicknair put in the work at the pitcher’s mound for the entire seven innings.

“It was a pitcher’s duel. Their pitcher struck out seven of us. We struck out two. They had more runners than we did, but when we got runners on, we made it count,” head coach Tamra Regalo said. “It was tit for tat and a good, solid performance with a tough opponent.”

Another highlight from the first playoff game was a phenomenal double play from Chloe Simon from right field in the sixth inning. Simon was able to gun a runner out at third base.

“That was a big defensive play. When walking out, our kids got complimented on how good our defense was because we played almost flawlessly Tuesday,” Regalo said. “We had one little boo boo in the outfield at the beginning of the game that helped them score their run in the first inning. After that, it was lights out.”

The impressive defensive play continued into Thursday’s game against St. John of Plaquemine.

Riverside scored a run in the first inning, and Alainah Felton built up the momentum when she struck a solo home run in the fourth.

The Lady Rebels were down 3-2 as St. John collected runs in the fifth, sixth and seventh innings. Ashley Hymel led off with a single in the bottom of the seventh. Everything fell into place as Anna Mistretta bunted her over and Corrin Cashio cleared the bases with a walk-off double with one out for the 4-3 win.

Vicknair once again manned the pitching mound and threw seven strikeouts to propel the Lady Rebels to the semifinals.

“We’re super excited to make it back to Sulphur this year. We knew it was going to be a hard road being a lower seed. It’s kind of been a David and Goliath field this year. This is the first time since I’ve been here that we’ve been seeded this low. Going into it as a lower seed was something new for us, and they are coming together as a team,” Regalo said. “We’re putting together better defensive games than we were earlier in the season. It just goes to show you how good our bracket is, 1-16. It’s not blowout games in the playoffs. It’s tit for tat all the way through.”

Calvary Baptist is a name Regalo is all too familiar with as a perennial powerhouse, and she knows the Lady Rebels have a great challenge ahead in the semifinals.

If Riverside Academy can rise to the challenge, they have a shot of advancing to Saturday’s Division IV championship game against the winner of Ascension Christian and Catholic – P.C.