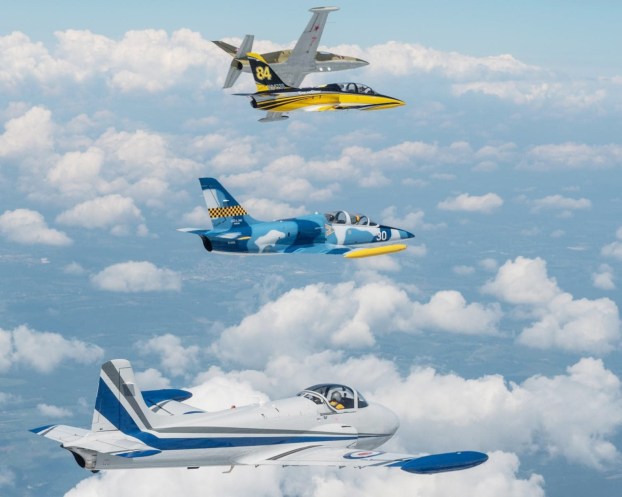 RESERVE — The public is invited to observe the Classic Jet Aircraft Association’s Cajun Jet Blast Formation Clinic in Reserve from 9 a.m. today, April 7, to noon on Sunday, April 11 at the Port of South Louisiana Executive Regional Airport in Reserve.

Although this is a private event and the general public will not be allowed on the airfield, Airport Director Lisa Braud said a viewing area will be set up for spectators to see various aircraft on the ramp.

This is the first time the Classic Jet Aircraft Association is coming to Reserve for a formation clinic. The Jet Blast was originally scheduled to take place in October 2020 but was rescheduled due to Hurricane Delta.
Classic Jet Aircraft Association Vice President Sonny Schilleci expects to see between eight and 10 classic jets at the Executive Regional Airport between Wednesday and Sunday.

“What we mainly do is formation training and proficiency training for the aircraft. We hold these events throughout the country at various locations, and this month it happens to be here,” Schilleci said. “The aircrafts will be arriving mostly on Wednesday and into Thursday. Flights are planned between 9 a.m. and noon and 1 p.m. and 6 p.m. each day. It’s weather dependent and dependent upon what aircrafts show up as well.”

Spectators will see former military aircraft, ranging from trainers to fighters. Aircraft on display could include L-29s, L-39s, T-33s and more.

Jets and trainers have been flown by civilian owners in the United States since the late 1950s. According to the Classic Jet Aircraft Association, the first military jets operated in the U.S. were British Vampires and Glouster Meteors. In the 1970s, this expanded with a few Canadian T-33s and F-86s used mainly for air shows and air racing.

Jim Robinson of Houston, Texas called for aircraft owners and pilots to establish a jet organization. The Classic Jet Aircraft Association held its first organized meeting in Denver, Colorado in 1989, and Robinson was elected as the first president.

Schilleci owns an L-39 that’s based in Reserve. He has been involved in warbird aviation all his life. His father was a flight instructor with a passion for aviation, and Schilleci was able to complete his first solo flight in a North American T-28B Trojan on his 16th birthday.
He joined the Classic Jet Aircraft Association after purchasing his jet about 12 years ago.

“The association provides support for operating aircraft. We also have liaisons with the Federal Aviation Administration to talk back and forth about regulations and keep things in check,” Schilleci said. “It’s basically a forum that individual owners can talk to each other about maintenance, parts, aircraft operations, safety, everything.”

After flying in Reserve from April 7-11, the Classic Jet Aircraft Association is heading to Sun N Fun in Lakeland, Florida from April 13-18. The next few months will be packed with cross-country travel, including: the Texas Jet Blast in Sulpher Springs from May 26-30; the Schuylkill County Airport Jet Blast in Pottsville, Pennsylvania from June 24-27; the Pre-Airventure Fly, Fuel and Feast in Pontiac, Michigan from July 22-25; the EAA Airventure in Oshkosh, Wisconsin from July 26- Aug. 1; the Music City Jet Blast in Lebanon, Tennessee from Aug. 18 – 22; and the 2021 Statue of Liberty flyover from Sept. 2-6.