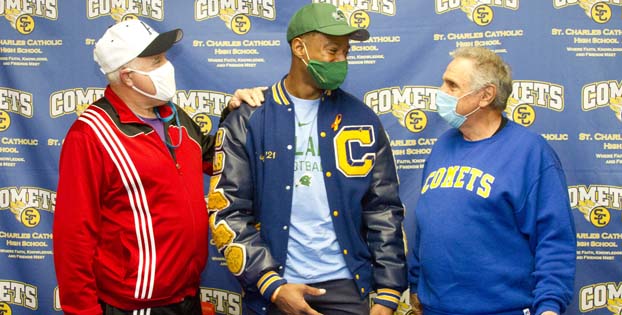 Eugene ready to take on Tulane

LAPLACE — Mandel Eugene Jr. was inspired to drive his football career to new heights after his grandmother gave him a scrapbook of newspaper clippings documenting his father’s high school football years at East St. John.

“I always knew I wanted to play football, but when I saw that, it motivated me to take it further in order to get better,” Eugene said.

Mandel Eugene Sr. never got the opportunity to play at the collegiate level, but his son will carry that torch when he graduates from St. Charles Catholic and joins the Tulane Green Wave football team this fall.

Eugene was surrounded by the love and support of his parents, grandparents, little brother, aunts and his nanny and parrain on National Signing Day last week.

Eugene was drawn to Tulane University because the family atmosphere reminded him a lot of St. Charles Catholic. He said SCC has prepared him to take his game to the next level.

“I think my coaches prepared the whole team. When they see you as a leader, they hold you to a higher standard, so you have no choice but to do what you need to do,” Eugene said.

SCC coach Frank Monica said Eugene was a leader on the field and in the locker room. He was the type of player to resolve conflicts between teammates and keep the team camaraderie strong.

“In all 51 years of coaching, I don’t know if I’ve coached five guys that had the leadership qualities that this guy has,” Monica said.

He described Eugene as a “yes sir, no sir” type of guy who did everything asked of him without taking any shortcuts. According to Monica, Eugene is a long-ranging player with great speed who can run the ball and hit with the best of them. He can be a great asset to Tulane as an inside or an outside linebacker.

“He’s a tremendous athlete, and I think Tulane got a steal,” Monica said.

Coach Mike Abbate remembers Eugene as a “mighty thin” running back on the Ascension of Our Lord middle school football team. Even back then, Eugene was a talented player with a pleasant attitude.

“He listened to the plays and was very good in the huddle. He knows exactly what to do,” Abbate recalled. “He’s an inspiration to the younger players who look up to him and take his advice as encouragement to keep moving forward and not quit football.”

Eugene has a goal to touch the field his freshman year at Tulane. He hopes to show his coaches that he’s capable of being a game changer.

His advice for younger players coming into high school is to find a senior or upperclassman who works hard and follow in their footsteps. Bryce Authement was among the SCC upperclassmen who encouraged Eugene to work hard in the weight room to get where he is today.

BOUTTE — A long awaited matchup between the East St. John Wildcats and the Hahnville Tigers ended in a sweep... read more