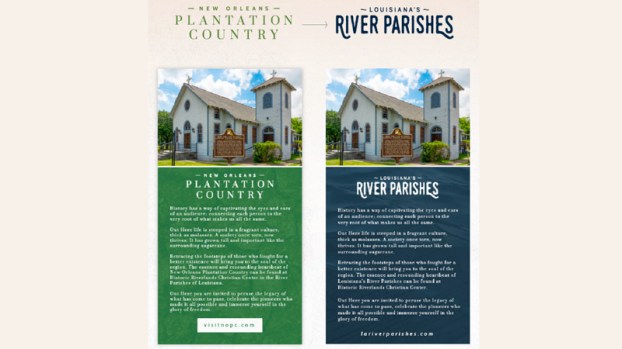 The “Louisiana’s River Parishes” name and logo are implemented into new marketing materials, pictured at right. The old materials are pictured at left.

LAPLACE — For more than 20 years, the “New Orleans Plantation Country” brand used by the River Parishes Tourist Commission brought millions of visitors to the region while turning away many others.

A brand analysis commissioned in the fall of 2017 found “New Orleans Plantation Country” to be divisive. Millennials of all backgrounds were shown to be especially displeased with the brand and what it represented, according to Buddy Boe, executive director of the River Parishes Tourist Commission.

Moving forward, RPTC will drive tourism in St. John the Baptist, St. James and St. Charles parishes not with a brand, but with the region’s name: “Louisiana’s River Parishes.”

Unlike “New Orleans Plantation Country,” Boe said “Louisiana’s River Parishes” represents the diverse experiences found in the region, from interactive swamp tours to culinary classes, bonfire traditions, historic encounters and everything in between.

The tagline for the new name is “Louisiana’s River Parishes: Where history, adventure and flavors collide.”

“This name rolls off the tongue because we’ve all been saying it our entire lives out here, and it is now a name that allows the categories of experiences we have to stand on their own underneath the umbrella of the name,” Boe said.

The new name was unveiled one month earlier than planned in response to the conversations happening across the country and world, according to Boe. The “New Orleans Plantation Country” brand is intrinsically linked to the region’s dark history and the call for systemic change.

However, Boe said the rebranding has been in the works for much longer. When it was finally time to change the name, it felt like a natural progression of the groundwork that has been put in place for the past two years.

The house icon was removed from the “New Orleans Plantation Country” logo in 2018. In 2019, the Tourist Commission financed a strategic plan for initiatives rolling out later this year grouping River Parishes experiences by category.

Each of the categories will have itineraries to help visitors make the most of their experience with the River Parishes. The first of the experiences, the Andouille Trail, is expected to roll out in October.

Wallace native Gary Watson, a New Orleans business owner, has long opposed the New Orleans Plantation Country brand. He referred to the verbiage as “potentially divisive and politically charged” and added that it exploits the enslaved.

Watson said the new name is step in the right direction.

“I don’t know what caused the sudden change, but it is appreciated,” he said. “Hopefully the change is step No. 1 towards humanity, cultural intelligence and creates an environment for small businesses to thrive.”

A new swamp zip line business coming soon to the Frenier Landing area helped accelerate the name change, according to Boe. He said it was essential to have an advertising campaign directly correlated to outdoor activities with the new cluster of swamp-based experiences. Visitors can now encounter the cypress swamps by airboat, barge, kayak and zip line.

Boe said promoting these diverse activities under the “New Orleans Plantation Country” brand would be a disservice. He compared it to marketing New York City only by its Broadway shows and ignoring everything else the city has to offer.

With Millennials gaining more spending power, Boe said it is also important to deliver the authentic experiences they crave.

“Kayaking through the swamps, freezing yet burning by a bonfire, walking amongst the cabins at Evergreen, biking the route of the 1811 Slave Revolt with an audio tour explaining the challenges the enslaved people faced…That is authentic. That is real,” Boe said.