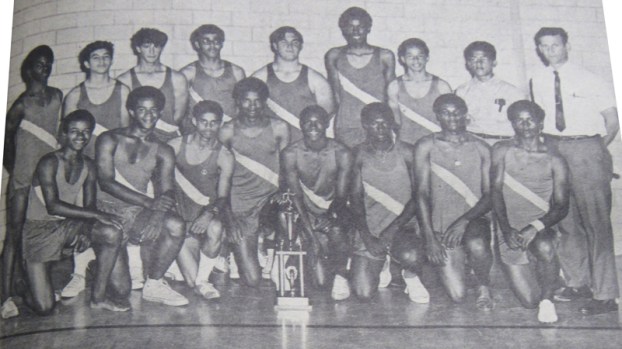 St. Joseph of Jeanerette held onto the title for at least seven consecutive years. That changed on Thursday, May 7, 1970, when the Edgard Tigers piled up enough points for a first place finish.

Edgard scored a total of 69.5 points to win the first track and field championship in the school’s history. St. Joseph of Jeanerette followed closely with 66 points, a mile ahead of third place finisher Davidson with 35.5 points.

Hymel previously coached at Reserve High School before making his way to the West Bank. It was a historic time with rapid changes occurring in St. John the Baptist Parish.

“When I went to Edgard, I started the track team in 1968,” Hymel said. “The school didn’t have a track team before that. We won three seasons later in 1970. This was when freedom of (school) choice came in and we got some new kids on the team.”

Joseph Hilaire came through for the Tigers when he tied for first place in the 100m run during the championship meet. Reed Schexnayder also placed in the 100.

Meanwhile, Charles Adams was the third place finisher in the 220m run. Mallory Clark represented the Tigers with a second place finish in the hurdles, while Clyde Maitrene placed third in the discus.

Whitney Joseph added to the Tigers’ score with a silver in the high jump and a bronze in the long jump. Mike Roussel took home second in the triple jump.

The Tigers also saw success in the relay events, placing second in the 440m and the mile relays. Roussel, Adams, Hilaire and Reed Schexnayder combined their talents to earn first in the 880m relay.

HAHNVILLE — Hahnville High School has found its next football coach from within. Offensive coordinator Daniel Luquet was chosen among... read more