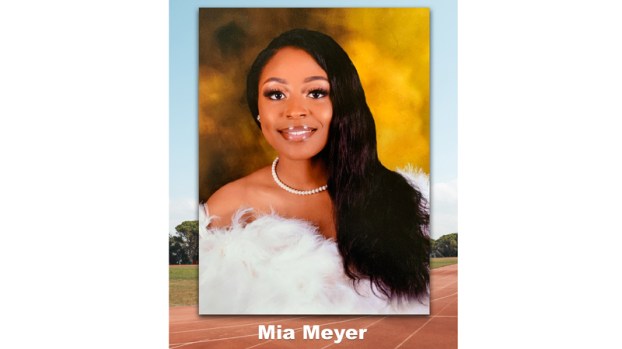 LAPLACE – Mia Meyer loves the adrenaline rush she gets during a track and field meet. Throwing the discus with all her might feels a little like flying.

Every event is a chance to reach her full potential and unleash her true talent. That talent went unseen when her senior track season at East St. John was cut short due to COVID-19, but the virus did not mark the end of her athletic career.

Next year, Meyer will compete on the women’s track and field team at the University of Mobile.

“I enjoy doing the discus the most because being in the ring is an experience,” Meyer said. “It’s kind of like an adrenaline rush, but you have to be settled. You have to calm yourself and then pick up your speed. It’s kind of like flying. You’re spinning, you’re throwing, and you’re giving it everything you’ve got.”

Meyer joined the East St. John track and field team as a freshman. As a junior, she started competing in the summer with the St. John Legends Track Club.

Discus and shot put have been her strong points throughout high school. Early on, she would claim third and fourth place finishes, but her coaches could tell from the expression on her face that she wasn’t satisfied.

“I showed a lot of potential to my coaches, especially Coach Percy Williams and Coach Mark Creecy,” Meyer said. “They put a lot of time and effort into me to get me where I needed to be, and throughout that time, my stats grew. Each year, I got more medals because I learned to do things differently. They taught me discipline and patience. They showed me true character, and they helped shape me into the athlete I am today.”

Coach Darren Simoneaux was another inspiration to Meyer. Both he and Creecy helped her to perfect her spin, pushing her throwing capability to new heights.

As an underclassman, Meyer fronted her throws. Her coaches told her that if she could throw 93 feet with a front, she could surpass 100 feet with a well-executed spin.

Meyer entered her senior track season with a goal to throw 110 feet in the discus and 32 feet in the shot put.

“My senior year was taken so fast. COVID-19 happened and I wasn’t able to express my best, but I knew that I was in the position to do better,” Meyer said. “I knew I was going to make my goals. I had Coach Simoneaux, Coach Percy and Coach Creecy behind me, motivating me and pushing me to get there.”

This summer, Meyer will work with Creecy to perfect her spin so she will be at her peak when she arrives at the University of Mobile.

Andy Canegitta, coach of the University of Mobile Rams track and field team, reached out to Meyer about competing at the next level. When she traveled to Mobile to visit the campus, Canegitta awarded her a scholarship.

“I’m most excited about jumping back into it. I was robbed of my senior year, and that has motivated and pushed me to be better my freshman year and to prove that I deserve my position,” Meyer said.

Athletic ability seems to run in Meyer’s blood. Her older brother Myles Meyer won district MVP for football in his senior year at East St. John. He went on to play for Kansas City and now plays for the University of West Florida, where he recently helped his team reach a championship victory.

She plans to study accounting at the University of Mobile, a career path inspired by East St. John teacher Jennifer Chauvin. Once she gets her CPA license, Meyer hopes to become an accountant for the FBI.

“I’m a very determined person. I’m self-motivated, and I love organization and working with numbers,” Meyer said. “Accounting was a challenge for me, and I like being challenged to reach my peak.”