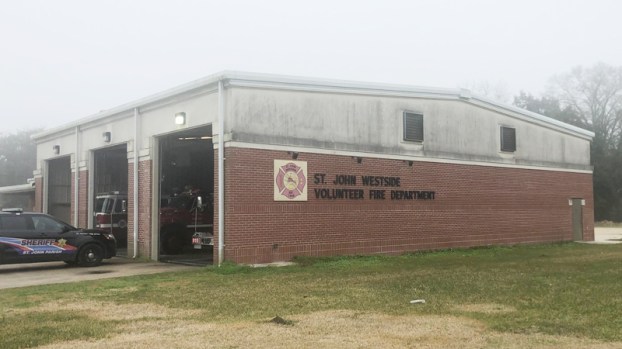 Renovations are in the works to improve deteriorating conditions within the West Bank fire stations.

LAPLACE — Few can disagree as to the disturbing conditions of the West Bank Volunteer Fire Department stations, especially as compared to the more pristine conditions in similar stations on the East Bank.

But how those conditions have degraded to reach a point one councilman called deplorable, potential solutions and if an East Bank/West Bank bias has played a role sparked a one-hour discussion at a recent St. John the Baptist Parish Council meeting.

He detailed station by station issues such as leaking roofs, no running water in at least two stations, inoperable toilets and a number of snakes in the Pleasure Bend station, unlivable conditions at the Edgard station, trees growing at the top of one station, painting required, rotting roof beams, graffiti on a stationhouse door, used equipment being sent from the East Bank, a lack of a working washer-dryer on the West Bank to wash uniforms, outdated radios, an overall lack of morale, malfunctioning vehicles and a cement apron sorely in need of repairs.

“Our residents pay the same taxes, and we don’t believe they should have to go to a station (to vote) that does not have running water and numerous snakes,” Roussel said.

Councilman Kurt Becnel, whose district is on the West Bank, said he was embarrassed to see “deplorable” conditions during a recent tour of the four stations.

“It is a disgrace,” he said. “Somebody has to be in charge of this. Compare these West Bank stations to East Bank stations. Not playing favoritism but we deserve fair treatment too.”

Becnel said he initially met with volunteer firefighters in August 2016 to gather input about what was needed on the West Bank. Shortly after, Becnel said he and Councilman Larry Sorapuru met with Cain Dufrene, chief operating officer, to discuss the issues.

Councilman Marvin Perrilloux said he was “appalled but not surprised” at the accusations. He mentioned the previously separate fire budgets for the west and east banks were consolidated into one and it “seems like the spending is not favorable to the West Bank.”

Dufrene responded that solutions are complex. He did inform council members that $80,000 has been dedicated to repair Station 91 in Edgard but will not cover all of the work that needs to be completed. Those are coming after $60,000 was spent in 2013 for renovations for a fire station that is only 15 years old.

Dufrene reminded council members that he met with them about their needs during the 2016 budget transition, which came about after some questionable spending and a lack of following proper spending protocol by the West Bank department. In 2017, Dufrene emailed Lumar to determine his needs.

According to Dufrene, Lumar replied with a list of priorities, and “to date all of those priorities have been addressed or funds allocated,” including purchasing all new radios.

Dufrene also said that he and Lumber discussed renovations to the Edgard station, but Lumbar said renovations should wait until after the new West Bank Safety Complex is constructed to temporarily relocate West Bank staff. At that point, a more comprehensive renovation of Station 91 could begin.

“I agreed 100 percent,” Dufrene said. “I don’t run the operations of the West Bank Fire Department. I’m not going to go into his house and tell him how to run things. I will if you want me to.”

Dufrene said he controls spending on the combined budget and bases his spending decisions on the most effective use of taxpayer dollars while meeting needs throughout the parish.

“You’re right, on the East Bank you won’t see (such dire conditions),” Dufrene said. “The volunteers are dedicated. Those stations are maintained by volunteers. That’s their house, that’s their responsibility.

‘”They take care of it, their trucks, they cut their grass. They report their issues and I report them (so they can be fixed.)”

He noted that the only issue he has ever received from Roussel was in May when a unit had safety mechanic issues. It was removed from service and repaired for $2,000.

“Putting the blame on us is kind of wrong,” he added. “We don’t do the maintenance for the West Bank.”

He acknowledged that some equipment has been brought to the West Bank from the East Bank but said “do we throw it away or give it to a department that needs it?”

Perrilloux suggested West Bank firefighters temporarily be housed in the West Bank Senior Complex, which recently underwent $100,000 worth of renovations, while renovations to Station 91 are completed. However, Robottom said the facility is not set up to accommodate sleeping quarters.

Dufrene said he will find a solution to house those firefighters but was emphatic when he promised “we are going to get those renovations done.”

He said he needs help from the West Bank volunteers and that he can’t tell them what to do. He said they report to Lumar.

“I can’t make the volunteers go over there to help my career guys,” he said.

Sorapuru said he was left feeling a bit confused about the chain of command and that Dufrene is the chief. He added that if anything needs to be brought to the council’s attention, Dufrene should bring it to them and it will get done.

“All I would ask is your support that whenever I give directives and (Lumar) comes you stand behind me on that,” Dufrene said, “That’s always been the problem. It’s been a little bit of hands off but if you want me to be hands on I’ll be hands on.”

“You have to be,” Councilman Lennix Madere said.