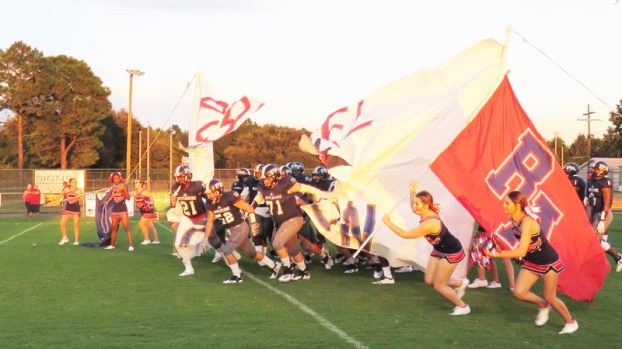 The Riverside Academy Rebels rush onto the field.

Riverside Academy rebounded from an 0-4 start to finish with three victories in its final five regular season games, setting the stage for a road, round one Division III playoff game at No. 7-seed Ascension Episcopal.

The trip ended poorly for Rebels fans, and the road back probably felt longer after RA fell 35-13 to the Blue Gators.

The game capped a challenging year for Riverside Academy, which had its third football coach in three years and a dramatic drop in player turnout compared to past years. Rebels coach Kevin Dizer noted staff members were aware of the obstacles they were up against when the season began.

“We probably only had 20-something kids who were with the program at the time,” he said. “It’s been an uphill fight for us, as a coaching staff, so for the kids that stuck with it and the new ones we had that came out, that’s a real big deal.

“Participation is not something that is recognized in this world enough, in my opinion, and for a kid to honor his commitment and stick with the team, that’s huge for me.”

Riverside entered 2018 replacing many of the names and talents that led the Rebels to a 2016 state title.

In their places, a new crop of Rebels student-athletes found their footing and place on the high school stage.

The sophomore finished with 1,554 passing yards, 16 touchdowns and only five interceptions. He also ran for 186 yards and three scores.

Louis Cheneau was the Rebels’ leading rusher, collecting 517 yards on the ground and eight touchdowns.

In limited offensive action, super sophomore Ahmonte Watkins demonstrated what is to come over the next two years, carrying the ball 30 times for 348 yards (11.6 yards per carry).

RA scored 47, 42 and 56 points in its three wins this season. Those victories were a relief following a difficult four games to start the season, which included losses to Southern Lab, Barbe, Rummel and De La Salle.

On defense, the Rebels were led in tackles by Chamar Jackson and Wilbert Robertson.

Ahmonte Watkins was also a force at defensive back, intercepting five passes and returning two for scores.

Following the season-ending loss in the playoffs, Dizer told his seniors to take the lessons learned and apply them to their lives, because that’s “what it’s all about.”

“To the rest of the team, the kids that are coming back, we don’t ever want to have this feeling again,” he said. “We don’t want to ever be a program that’s getting beat in the first round. That’s my mission. I want to put this type of year behind me and I don’t want to ever experience it again.”

With a dedicated group of coaches and talented players in place, the Rebels are primed for growth in 2019.

Destrehan (12-2) scored 57 points in a home playoff game, but it wasn’t enough offense as the Wildcats lost their... read more