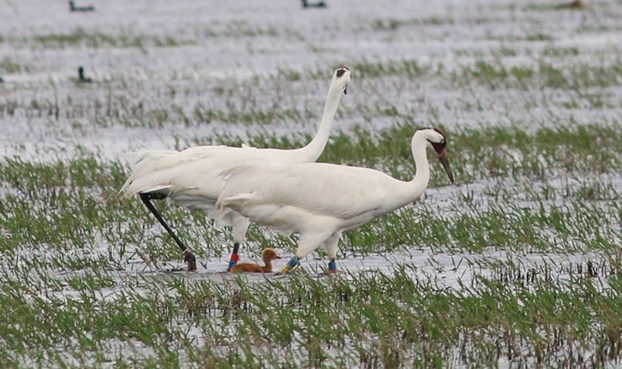 Patience has paid off for one of Louisiana’s female whooping cranes that was a part of the initial population from 2011The female crane, designated L7-11, laid the first egg of the experimental population in 2014. However, that attempt, along with subsequent others for her, were unsuccessful. But this year, two eggs hatched and, as of this writing, both chicks are alive.

The chicks are two of four that hatched this spring in Louisiana’s experimental whooping crane population. Of particular note, 24 pairs nested this spring, almost double the previous high of 13. This increase in nesting is a sign of breeding progress in the project, which seeks to return the whooping crane to Louisiana.

“(L7-11) has been a real positive for us this year,’’ said LDWF biologist Sara Zimorski, who leads the whooping crane project. “She was the very first female to ever lay an egg in this population. Unfortunately, she and her first mate were infertile. After his death she repaired and brought her new mate to her nesting territory. They produced a few fertile eggs in 2019 and 2020 but had not been successful in hatching them. Finally, this year, in her eighth year of nesting, she and her mate were able to produce two chicks that have survived.’’

Zimorski said the 2021 breeding season was a mixed bag. There were positives, such as the surviving chicks and the increased number of breeding pairs. But only four of the 14 chicks hatched this year made it.

“It started off well but we had a rough second half,’’ Zimorski said. ““Unfortunately, between flooding rain events and other breeding problems we didn’t have the success we had hoped for initially. Although, actually with so many new pairs it’s not unusual that they wouldn’t be successful on their first attempt. We’re still seeing progress as the birds gain experience and we are pleased with the four surviving chicks.’’

Whooping cranes are slow to mature and only lay one to two eggs during a nesting attempt so reproduction can be a slow process. The cranes normally don’t reach sexual maturity until they are 3-5 years old and the cranes when introduced into Louisiana have been less than 1 year-old and a little more than one third of the population is 3 years old or younger.

Anyone encountering a whooping crane is advised to observe the bird from a distance and to report the sighting to LDWF at: https://www.wlf.louisiana.gov/page/report-a-whooping-crane-sighting-or-violation . Whooping cranes are large-bodied, white birds with a red head and black facial markings. Birds measure a height of five feet and have a wingspan of seven to eight feet that makes them very distinctive. In flight, whooping cranes display black wing tips and a fully extended neck, and legs, which extend well beyond the tail.

Anyone witnessing suspicious activity involving whooping cranes is advised to call the LDWF’s Enforcement Division at 1-800-442-2511 or use the tip411 program, which may offer a cash reward for information leading to arrests or convictions. To use the tip411 program, citizens can text LADWF and their tip to 847411 or download the “LADWF Tips” iPhone app from the Apple iTunes store free of charge. Citizen Observer, the tip411 provider, uses technology that removes all identifying information before LDWF receives the text so that LDWF cannot identify the sender.

For photos and video, go to https://ldwf.canto.com/v/2021WhoopingCraneNesting/allfiles?viewIndex=0.