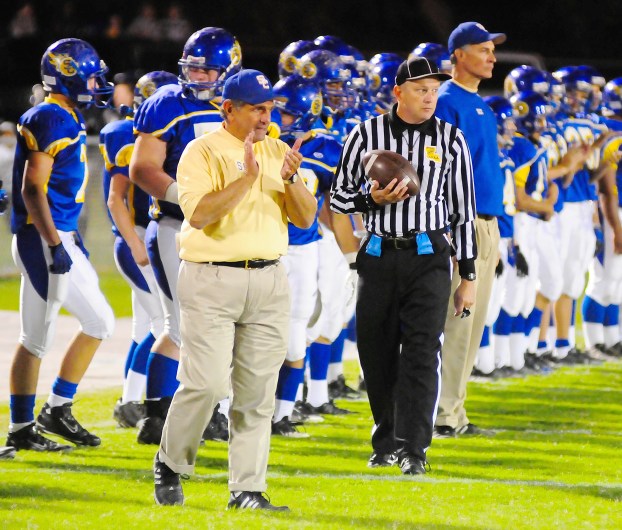 St. Charles Catholic’s Coach Gary Zeringue and the multimedia students recently created a video chronicling the career of Coach Frank Monica. The video presentation can be viewed on the SCC YouTube page at the following link: youtube.com/channel/UC4tcVeVXL8AytrbWpW2uD9A

As he begins his retirement, St. Charles Catholic’s Coach Frank Monica has reflected on his life, family and career. The following poem written by Coach Monica was read aloud by Tricia Lowry during a recent Athletic Awards Ceremony:

There was a boy at the age of 5, who lost his father,

But was raised by his sisters & brothers.

He aspired to play baseball as his profession,

Batting rocks nightly was his obsession.

School was just for sports and not to educate.

He was fortunate and glad just to graduate.

All State in football was quite an honor in the fall,

But then Nicholls State came and signed him in baseball.

And his dream of Major League baseball, when told he was too short.

He went on to coaching three sports with no aspirations,

Not realizing his purpose would become his inspiration.

God sent him a real cute wife from a distant place.

Little did she know, what she had to face.

No goals, no salary, no plans for success.

Just to make every kid to play his best.

From high school to Tulane, he pursued his star,

His family came first when he took his next position,

Coaching his sons and daughters, what a transition.

His passion and intensity was at an all-time level.

Hold everyone accountable – why he was once called “The Devil”

He loved his players, coaches, and fans as well

Even referees – though you couldn’t tell.

Sorry if he hurt anyone, he hoped only to LOVE

The journey is over, on suggestion from above.

His players he will always cherish,

Will pray for them constantly in hopes they will flourish.

The competitions, the fans, the students and faculty will never be the same

But in the end, it was always about “THE GAME!”

LAPLACE — Baseball and basketball camps are in full swing at St. Charles Catholic High School in LaPlace. According to... read more