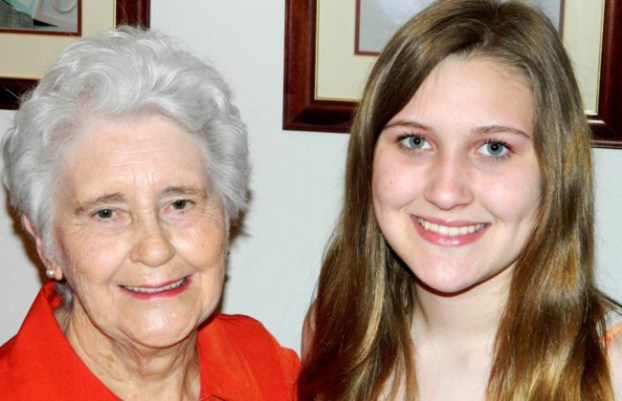 This Mother’s Day & every day, I strive to ‘Be like Ghee’

Last summer, I wrote an editorial in memory of my paternal grandmother who passed away in 2015. I didn’t imagine it would have such an impact on my immediate and extended family. It opened my eyes to the power of writing and what a gift it can be to memorialize a loved one with heartfelt words.

When my maternal grandmother passed away in November 2020, I knew I wanted to do the same for her. Mother’s Day seemed like a perfect time to write about Betty Ruth Goodson Cuti because she represents everything the word “mother” stands for.

What is a mother? She’s someone who loves unconditionally and relentlessly. She’s a nurturer who puts others before herself. Betty, known affectionately as “Ghee,” was a mother figure who had a hand in raising not only her five children, but also her 10 grandchildren and many great-grandchildren.

We were close. Extremely close, given she was at my house five days a week from the time I was born until a couple of years after I went to college. She was my caretaker every afternoon when I got off the bus, every long summer day when I was out of school, and every time I stayed home sick.

She was there long after I became too old to need a babysitter, and her presence alone, just being able to lean on her shoulder or hold her hand, was just about the most comforting feeling in the world. It made me happy to be in the same room as her, and I found myself always gravitating to the seat beside her at family gatherings.

The truth is, there’s a lot I never learned about Ghee. I suspect she was like an iceberg, with only a small portion of her thoughts and feelings peeking above the surface as spoken words. She was rarely the focal point of conversations, but she loved to listen. I can picture her sitting at the table, mouth slightly open and curved into a smile as she looked toward whoever was speaking. Being surrounded by her children, grandchildren and great-grandchildren was what made her happiest, and she didn’t have to say a thing to make that known. You could see it in her smile.

She told me stories about her early years growing up in Ozark, Alabama with two sisters and a brother. Some of her most treasured childhood memories included fruit baskets at Christmas time and Western-themed dances on weekends.

Being born in the midst of the Great Depression meant that she often went without, but she always had a grateful heart. In the eleventh grade, she dropped out of high school to work in a cotton mill and help support her family.

I know the story of how she met my grandfather while singing on a local radio station when he was stationed at the Fort Rucker Army base in Alabama. They had been married for 66 years when she passed away. Unfortunately, I never asked her much about the decades that followed her move to Norco, Louisiana in the 1950s.

Here’s what I do know: Faith was always a large part of her life, and she spent her later years as a steadfast member of the Luling Church of Christ. She loved working in her garden and watching birds flutter around the feeders in her yard, especially the bright-colored cardinals and blue jays.

Baby Ruth was her favorite type of candy bar, perhaps because her middle name was “Ruth.”

“Gone with the Wind” was one of her favorite movies, I presume, because the two-piece VHS set was the only movie stored at the bottom of her TV stand for decades. She also enjoyed watching daytime game shows, talk shows and soap operas at my house whenever we didn’t have the TV turned to a kid’s station.

Ghee was a provider for every one of her  grandchildren. We all fondly remember watching her prepare her signature “flapjacks,” which were a lot like beignets. She taught us all how to use a cup to roll out the dough before cutting it into rectangular shapes for frying.

However, the most important characteristic I could share about Ghee is that she is one of the purest people I’ve ever known. She never spoke poorly about anyone. She never lost her patience or seemed to get upset, and she had this aura of innocence about her that made her so precious to everyone who knew her. As my cousin Britney put it, she was God’s perfect vision; love in its purest form.

Since November, whenever I’ve felt stressed or overwhelmed, I remind myself to “Be Like Ghee.” I find that helps me ground myself and be the person I strive to be, someone like Betty Ruth Goodson Cuti.

Brooke R. Cantrelle is news editor at L’OBSERVATEUR. She can be reached at brooke.robichaux@lobservateur.com or 985-652-9545.

Help for mother with long-term care

Dear Toni: You have written about other options for long term care in the past and have discussed life insurance... read more