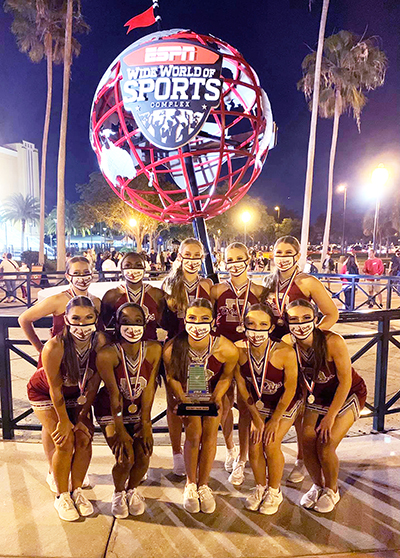 ORLANDO — After five years of breaking into the Top 10 of the UDA High School National Competition in Orlando, Destrehan High School’s Desty Darlings Dance Team made history in 2021 by finally earning their medals.

“Every year, we make history, and the team builds on the legacy of the year before,” Desty Darlings Director Micque Voges said. “We’ve been in the top 10 at least five times, but this is the first time we’ve ever medaled. That is a really big deal at this particular competition. Another thing that is special about this dance team is that girls who have graduated come back to assist. They are very involved with the team because they want the legacy to continue. That speaks volumes for the type of girls that are on this team.”

While freshman Bailey Wehrlin wasn’t able to attend Nationals since it coincided with her brother’s wedding, she still attended practices to help her team prepare for the competition.

Rome is confident that she will be close with the girls on the team for years to come. While this year’s Nationals were anything but typical with COVID-19 safety guidelines in play, the experience gave her a new appreciation for her teammates.

“This was definitely long awaited. Nationals was pushed back three or four months, so we were excited to be there. Normally you walk around and talk to other people there, but we were more confined this year. It was good because we got to bond as a team,” Rome said. “I think what sets us apart is our ability to bond so easily. We all click together so well.”

While there were less teams at the UDA Nationals this year, Co-Captain Kailie Carrigee said the quality of the competition was still there because some phenomenal teams were present.

This year, there was also a virtual component of the competition with some teams competing remotely, and small and medium teams were grouped together for the first time.

“That was definitely an aspect that was different for us this year, but we rose to the challenge,” Carrigee said. “Despite only having a few people on the floor, we had to perform as if we were a huge team of 20.”

Carrigee and Rome are used to seeing packed rooms and lively crowds at UDA Nationals. This year, the team’s parents and fans were the only faces in the audience. Yet, the girls were still grateful to have the milestone moment of walking out onto the stage under the iconic Disney castle when it came time for finals.

Carrigee enjoyed expressing her love for dance during the hip-hop number, an upbeat Nikki Minaj remix. Rome also loved hip-hop, though she also connected to the story of spiritual awakening told through the team’s “Walking in Memphis” jazz routine.

According to Voges, The Destys Darlings’ cleanliness and presentation made the game day routine stand out from the competition.

“This was our first year doing game day, and we placed second in the nation for that,” Voges said. “They stood out in the way they presented themselves and performed. You could tell that they had a lot of school pride and pride in their community…We wanted to bring a little piece of Destrehan to Orlando, and I think they did a very good job of doing that.”

The Desty Darlings look forward to returning to Orlando in 2022 for a shot at the national championship.