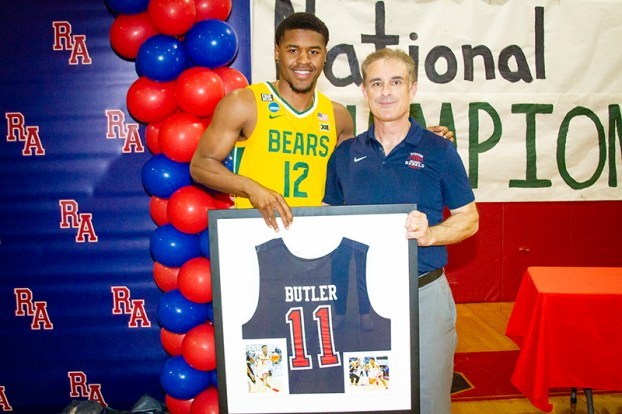 RESERVE — Just three years ago, Jared Butler was a high school basketball star walking through Riverside Academy’s hallways. Last week, he was signing autographs in the Rebels gym after his No. 11 Riverside Academy jersey was officially retired.

The Riverside Academy family and St. John Parish dignitaries cheered Butler on Thursday afternoon during a ceremony that honored his achievements in the 2021 NCAA Division I Basketball Championship. Butler led Baylor University to its very first national championship title with a dominating 86-70 win over Gonzaga. He made St. John the Baptist Parish proud when he was named Most Outstanding Player for the 2021 NCAA Tournament.

The world watched Butler as he led his team to victory with 22 points, which included cashing in on four three-point shots. During the championship, Butler also had seven assists, three rebounds and zero turnovers, and he scored or assisted in 38 of Baylor’s 86 points.

Less than one month before the championship, Butler made headlines when he was named the Associated Press’ Big 12 Player of the Year.

Rebels basketball coach Timmy Byrd said there is a lot that the public doesn’t know about Jared Butler, such as the fact that he graduated from Riverside Academy in 2018 with 27 college credits already under his belt. That head start is allowing him to graduate from Baylor one year early this spring, just in time to prepare for the NBA Draft.

Byrd added that Butler is the only NCAA athlete in the country to earn a spot on the NCAA Oversight Committee. While playing college basketball on the No. 1 team in the country, Butler still finds team to teach second grade Sunday school.

Byrd thanked Butler’s parents, Richard and Juanea, for sending their son to Riverside Academy when every Catholic school in New Orleans wanted him on their team.

St. John Sheriff Mike Tregre recalled coaching Butler in the local recreational league. Despite the fact that he was only 6 years old and playing on a 7- to 8-year-old team, he proved himself to be one of the best ball handlers in St. John Parish.

Tregre joked that Butler has come a long way from the little 6-year-old who never wanted to share the ball on the court.

“When I saw Jared leave Alabama and go to Baylor, all he needed was a chance, and he got one. Guess what, he did not let us down,” Tregre said. “He represented his family. He represented St. John Parish…He walked out a champion.”

Parish President Jaclyn Hotard has known Butler since he was a child attending John L. Ory, and she is proud of the remarkable young man he grew up to be.

“The way you delivered (during the championship) seemed so effortless, like it was no sweat off your back,” she told Butler.

Hotard also said she plans to give Butler a key to the city when he is able to come before the St. John Parish Council.

Beyond the newfound public recognition, Butler said winning the NCAA Division I championship has changed how he views God and the way he feels about life.

“One thing I learned and want to leave with y’all is that God is for you. He’s not against you,” Butler said. “You think He’s mad at you, not wanting you to succeed, or He’s done some things in your life that probably make you mad at God, but I’m telling you that you wouldn’t be who you are without those situations and those circumstances.”

Butler said it seems like only yesterday he was attending pep rallies in the Riverside Academy gym. Having his No. 11 jersey retired was something he wished for when he was a student, and Thursday’s ceremony was nothing short of a dream come true.

He left Riverside Academy students with the following advice:

“You don’t realize how far you can go. I was sitting in your shoes in the same place, and I became successful. Don’t ever believe that you can’t go anywhere. The only thing that’s separating you from success is hard work and dedication.”