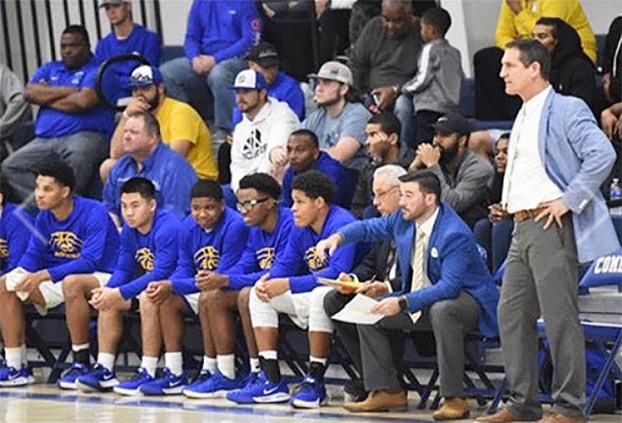 LAPLACE — On March 25, 2021, SCC Basketball Coach Jeff Montz gathered with his team to talk about transitions. He reminded them about the transition from offense to defense, from a play to a new plan; and then he introduced a new transition, one that involved him stepping down as head coach of the team.

Jeff Montz has been coaching basketball for 25 years, leading both the girls and boys team while he was teaching and serving as an administrator at St. Charles Catholic. He left SCC to become principal at St. Joan of Arc Catholic School, and returned to SCC last season. Coach Montz has had the privilege of coaching the sons of many parents over his years, but enjoyed the opportunity to coach his son, Christian, for his senior season last year. Since returning, the program has grown in size and success, and Coach Zach Weber has been by his side through it all as an assistant coach.

“I’m confident that you have a bright future moving forward under the leadership of Coach Zach Weber,” he said as he gestured toward his longtime assistant coach and SCC alumnus. He went on to say that he knew Coach Weber would continue to uphold the commitment to excellence and the high level of participation that the program boasted under Coach Montz’s tenure.  Coach Wayne Stein, as the Athletic Director, spoke on behalf of the school to welcome Weber into the position in front of the team.With nearly 50 players in the program, Coach Weber inherits a large and lively group as they begin to implement their training and conditioning for next season.

As a Comet, Weber played basketball and baseball at SCC all four years before going on to Southeastern Louisiana University to study business. Since graduating, Weber has coached basketball and baseball for five years at St. Charles Catholic, serving as the top basketball assistant and as the top baseball assistant. For the last two years, Weber has run the defense for Coach Montz for the varsity team, and he was named Assistant Coach of the Year in 2019 for Baseball serving under Wayne Stein.

When asked about his goals for the program, Weber said, “First, I’m thrilled for the opportunity Dr. Millet, Wayne Stein and the Administration have given and trusted in me to run a program that means so much to me. Being an alumnus of this great school, I hope our players will get out of this program those life lessons and core values that they will use not only here at SCC but also in their future endeavors. A goal of ours is to bring the St. Charles Catholic basketball program to the next level and that is to consistently play at a high level every night.  I think our athletes are ready to take on that challenge. We will continue to strive to present a respected program of which the community and SCC Comet Family can be proud.”

When asked about Coach Jeff Montz, Weber said, “It has been a pleasure to have coached with and learn from Coach Montz. He has been very dedicated, loyal and professional throughout his years here at SCC, and our program cannot thank him enough for all he has done. I hope that Coach Montz knows the impact he has left on his players during his time here. We hope nothing but the best for him. I am truly happy to be able to call him a friend.”