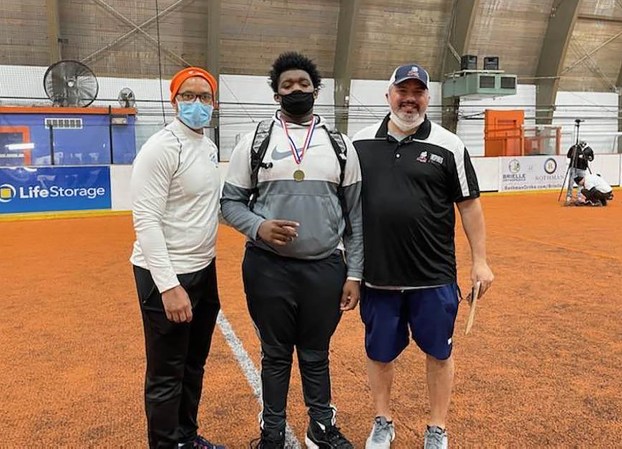 RESERVE — Alex Ross believes that hard work can get him anywhere he needs to be in life. The

Riverside Academy sophomore seeks out opportunities for self-improvement, which led to him attending the NUC Elite Lineman Camp in New Jersey.

Alex was the only football player from the state of Louisiana to compete at the camp that featured the talents of more than 40 offensive and defensive linemen from across the nation.

By the end of the camp, he was selected as one of the top three offensive linemen in attendance.

“I was searching for camps on Twitter, and that’s when I found Coach Schuman’s page and sent my tape over to him. I sent it to him, and he got back to me the same day and sent all of the information about how to go to the camp.”

Alex and his parents left St. John the Baptist Parish on Friday, March 19, and returned home Monday, March 22. While in New Jersey, Alex picked up some great techniques that will give him an advantage on the field next season.

The purpose of Coach Dave Schuman’s NUC Elite camp is to bring young, skilled football players together to compete and work with each other. There’s also a recruiting aspect of the camp in

which its database and results are shared with more than 5,000 college coaches across the

country. Top players receive invites to NUC All American games, as well as NUC All Academic

and NUC All World games.

Alex wants to take his football journey “as high as it can go” and hopes to one day secure a spot in the NFL. He’s had his head in the game since he was 4 or 5 years old, and the first half of his high school career has been successful. Alex received first team all-district and first team all-state designations as a sophomore, and he didn’t give up a single sack last season.

After football season comes to a close, he stays busy on the Riverside Academy basketball team in the winter and competes in throwing events on the Rebels track team during the Spring.

Football has a special place in his heart, and he thinks of his teammates as brothers.

“I love playing with friends and having the opportunity to show what we can do as a team. The

season didn’t end how we wanted, but we’re going to go back at it next year,” Alex said. “I

helping me every day after school with my steps and my foot placement.”

Dizer said Alex was a reliable player for the Rebels last season.

“He was solid for us all of last year. He blew me away with how much he improved and was able to make all state,” Dizer said. “He still has so much room to improve, and he can dominate for us in the next two years if he puts in the work.”