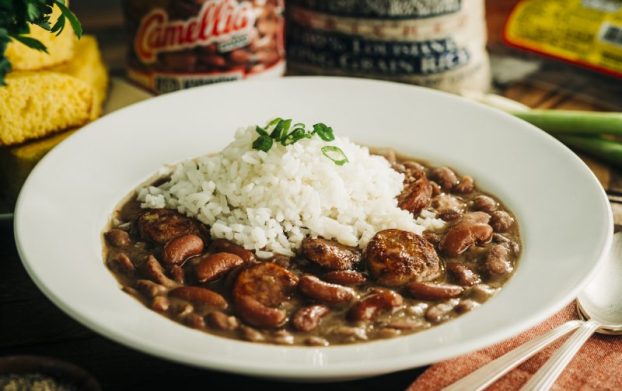 NEW ORLEANS — Three iconic Louisiana brands, Cajun Country Rice, Camellia Brand and Savoie’s® Foods have teamed up and are on a mission. Come Monday, they want to shine a light on tradition — they want red beans, sausage and rice to be on every table in the state.

The nearly 200-year history of red beans and rice as Monday’s favorite meal is up for some debate, but most agree that it goes back to 19th Century New Orleans and the one-two punch of families serving pork at Sunday lunch and then looking for an easy meal on Mondays, the traditional wash day.

When kidney beans arrived in the Crescent City from Haiti, New Orleanians drew on local flavors and ingredients to create the recipe that became a Monday staple. All these years later, three iconic Louisiana businesses have joined forces to make sure the next generation of Louisianans knows how to keep the tradition of this humble, yet tasty delicacy, moving forward.

“Bringing attention to our state’s history and food is a way to celebrate something good — this is a real Louisiana tradition,” said Vince Hayward, CEO of L. H. Hayward & Company, owner of Camellia Brand, based in New Orleans. “And, how do you make an authentic Louisiana dish? You have to use the right authentic Louisiana ingredients.”

“We have something special here,” said Lafleur, CEO of Savoie’s® Foods based in Opelousas. “More and more people are recognizing that the real Louisiana food we have here is different — it’s got good flavor and it’s a good tradition.”

With deep Louisiana roots and in true Louisiana style, all three brands have grandmothers who played pivotal roles in the companies’ histories and development.

Trahan, co-owner of Falcon Rice Mill and Cajun Country Rice based in Crowley, has the evidence he needs to know that his grandmother called on a higher power to continue the family’s business after her husband died in a tragic car accident in 1971. Shortly after Trahan and his sister Christine bought the business from family members back in 2011, they decided to do some minor remodeling. In a supply closet in an office, they found more than they had bargained for.

“When we were tearing the closet down, we found a six-page prayer, front and back, that my grandmother, Evelyn Hanks Falcon, had tacked to the wall near the top of the closet. She was doing everything she could to help the mill — to save the business and our family,” Trahan said of his grandmother who was born in Indian Bayou in 1908.

Her husband had just died in an instant and he had done business with farmers and vendors throughout the region on a handshake — with little to no records of the agreements he had made. Under her leadership, the business, which began way back in 1942, pulled through.

But Cajun Country Rice isn’t the only business whose history is tied to a formidable woman. Affectionately known as Ms. Eula, Eula Morris Savoie was born in 1926. Her pioneering and resourceful spirit launched the St. Landry Parish business that employs 94 people today. Using a hand-operated No. 3 home meat grinder and her mother’s recipes, Savoie began making smoked sausage, boudin and hogshead cheese, selling them in their grocery store in 1955. Soon, she branched out to selling her products throughout the area and launched what came to be her Cajun-certified empire.

At Camellia, Hayward’s grandmother, Elizabeth Hayward, also played a pivotal role in the company’s early days. The company started back in 1923 as their grandfather sold beans at the French Market.

“The Camellia was our grandmother’s favorite flower,” Hayward said. “The flower also symbolizes love — so, our grandfather decided to name the company in her honor.”

Look for these brands in a grocery store near you so that you can make and serve Monday’s favorite meal at home. To learn more, go to RedBeansAndRiceMondays.com.

In an effort to educate the younger generation and bring the Monday tradition of red beans and rice to the top of mind for adults, the three companies have decided to host an art competition, Monday’s Favorite Meal: Red Beans and Rice Art Competition.The contest will run through March 22, 2021 and is open to fifth graders and up across the state of Louisiana. For more details, go to MondayTradition.com/Contest/.