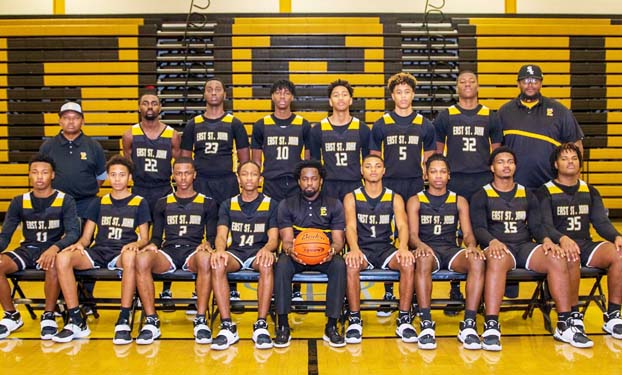 RESERVE — The East St. John basketball team is hungry for success and working hard to set a new standard.

The Wildcats played the first District game of the year Monday against H.L. Bourgeois and persevered with a 69-63 win in double overtime, pushing the team to an 11-3 record.

First-year coach Antonio Broadway Sr. said the boys have improved offensively since the start of the season. Their communication is strong, and Broadway is always challenging them to break free of their comfort zones on and off of the court.

“I see a lot of progress with what we’re doing with The E right now,” Broadway said.
“The young men are buying in. They are getting better, and I will tell them every game that my moral for the season is to believe. Believe in the system, believe in what we’re doing, and believe in your coach and the process.”

Some Friday mornings, the boys will come in as early as 5:30 a.m. to practice. There are days when the team will get there even earlier than their coach.

“We want to change their mindset and do something they’ve never done before,” Broadway said. “With that being said, these guys show up in the morning, and they put in the work. They are working on the little things, and I challenge them on a daily basis. Even before practice and after practice. That’s the moral of it – building each other up as young men and as players on a team.”

Several returning players have contributed to the depth of the team. Senior Robert Ferrygood is one of the Wildcats’ main defensive specialists. The big defender is a multi-year starter who really pitches in, according to Broadway.

“He works hard, and he’s the first one at practice every day,” Broadway said.

Jahyrie Victor, another senior on the team, is playing his first full season and embracing his new leadership role. He is also known for handling the ball well, according to Broadway. 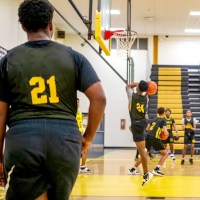 Junior Warren Snyder III is one of the most consistent shooters on the team, averaging about 10 points per game.

Sophomores Amir Rios and John Bowser are two of the younger guys on the team, but you wouldn’t be able to tell by size alone. Bowser stands 6’5” and is averaging 19 points per game. Rios is about 6’3” and averaging roughly 14 points per game. Broadway said he relies on Rios a lot during games.
The basketball season kicked off in the second half of November as East St. John collected early wins against Amite, Tara, Lafayette Christian and Family Christian. The Wildcats stumbled in the next game against Tara and took another defeat against Cecelia, though both games were lost only by narrow margins.

As of press time Friday, East St. John was preparing for a District match against Hahnville. The next scheduled game is against Walker on Jan. 13, followed by a District game against Destrehan on Jan. 15.

Throughout January and February, East St. John will be pitted against Terrebonne, Thibodaux, Central Lafourche and other talented 5A teams.

“It’s a tough district. We have to come in and be ready to fight,” Broadway said. “We have to have a game plan and game change to be victorious. We’re looking to push a new standard, and I love the direction that we are headed with The E.”

The Riverside Academy girl’s basketball team may be young, but these Lady Rebels aren’t lacking when it comes to talent.... read more