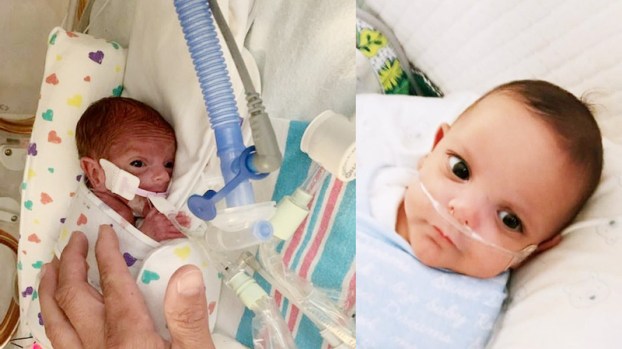 Baby Russell William Appold Jr., pictured shortly after birth, left, and after coming home, right, was the youngest gestational-age baby to graduate from the NICU at Tulane-Lakeside Hospital in Metairie. He was born at only 22 weeks gestation and has defied all odds.

LAPLACE — Natasha Williams of LaPlace was 22 weeks pregnant when her water broke the morning of her baby shower.

Baby Russell William Appold Jr. made his debut four months early on May 22, 2020, weighing only one pound. Given only a slim chance of survival at birth, Russell Jr. defied the odds and became the youngest gestational-age baby to graduate from the NICU at Tulane-Lakeside Hospital in Metairie.

Baby Russell weighed seven pounds when he left the NICU on October 1 with a grand send-off fit for a king. Masked hospital workers lined the hallways and twirled handkerchiefs in honor of Russell Jr., who wore a paper crown in his infant carrier.

Russell Jr.’s story was shared on Good Morning America in October, and his family has an interview with the Kelly Clarkson Show lined up for February. His story has inspired thousands, but parents Natasha Williams and Russell William Appold Sr. are most grateful that their son is happy, healthy and home. 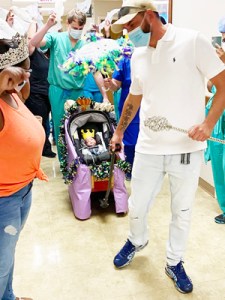 Russell William Appold Jr. left Tulane-Lakeside Hospital on Oct. 1 after more than 130 days in the NICU. He was born weighing one pound and left the hospital weighing seven pounds.

“Technically he’s eight months old, but right now, he’s like a four-month-old. Developmentally, he is right where he is supposed to be,” Williams said. “It’s a miracle because there are babies born at 30 weeks that still have to come home with a feeding tube. He’s home with just a little bit of oxygen.”

Occupational therapist Diane Robichaux has worked with many premature babies since 2008, but none were born as early as Russell Jr.

“He’s doing very well,” Robichaux said. “With an adjusted age of about four months, he’s starting to roll independently. He’s tolerating longer periods of tummy time. He’s eating well and developing socially with lots of eye contact and smiles, which is all very good for a baby born at only 22 weeks gestation.”

While Russell Jr. is making great progress, it hasn’t always been an easy road. Williams recounted the emotions she and her fiancé went through when they didn’t know if their son would survive.

“The first two weeks were the hardest weeks of my life. They were telling me my baby was going to die. It was an emotional rollercoaster,” Williams said.

She added that Russell Jr.’s progress would not have been possible without the hardworking medical team. 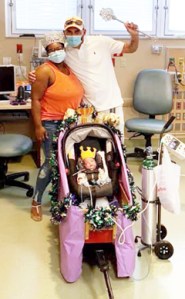 “The doctors at that NICU at Tulane are miracle workers,” she said. “They were so dedicated with him.”

According to Williams, doctors put Russell Jr. on a special type of formula that allowed him to grow and thrive. There were setbacks along the way during his 130-plus day NICU stay. It was also hard for the parents to not hold their baby for two months. At the beginning, they could only touch his hands and feet, since touching his stomach or back would cause his skin to peel off.

Eventually, he got stronger and was able to be held. By September he was able to a bottle.

At eight months old, Russell Jr. still loves to eat, and he’s developing his own personality.

“He’s playing this little game where if Dad is in the room, he will do a little cough to get his attention and act like he wants to eat more. He knows Dad will give him more food,” Williams said. “He also loves to smile. He’ll light the room up with that little smile.”

The family has a bright future ahead. They will soon move from their apartment in LaPlace to a house in St. Charles Parish, where they will make memories for years to come.

The world is continuing to follow their story through the Baby Russell’s Journey Facebook page, which has followers from as far away as Germany.

“We’ve had flowers and people have mailed us diapers,” Williams said. “Everyone who has reached out to him has instantly fallen in love with him.”

LAPLACE — Founded in 1911 in the halls of Howard University, the Omega Psi Phi Fraternity Inc. name was derived... read more