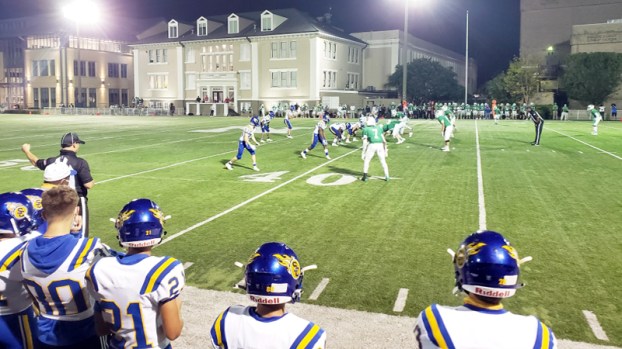 NEW ORLEANS— The St. Charles Catholic Comets fell Friday night with a big loss to an undefeated Newman in their first district game of the season.

From the first snap of the ball, it was quite evident that Newman was going to play the Comets hard, scoring both of their touchdowns in the first quarter. The first touchdown was a 22-yard pass to Pike Philibert early in the quarter. Not long after, still in the first quarter, the Greenies would score again with an 11-yard pass to William Randle. However, the Comets would stop them there.

Both teams showed great physical strength in their offensive and defensive lines. Although the Greenies’ offense was very tenacious, the Comets defense stayed strong and continued to be tough, not allowing much passing or running from the Greenies and sacking Arch Manning quite a few times.

Both teams went back and forth in the second quarter, exchanging yardage, but neither team scored. The Comets’ Kamren Campbell made a big play with an interception at 4:45 to the half, which gave the Comets new life in the second quarter. Unfortunately, a fake field goal attempt by the Comets turned into an illegal formation flag, which knocked the Comets down again, leaving the score at 14-0.

A few minutes later, an interception made by the Greenies with two minutes left in the half left the Comets without scoring in the first half. The score was 14-0 by halftime with the Greenies on top.

The Comets came out for the third quarter playing harder and making many good plays with Keenan Gauff gaining many yards on carries. The offensive line did a great job of holding the Greenie defense just long enough to allow Zach Vicknair to score, putting the Comets on the board for the night.

With 6:14 into the third quarter, the score was 14-7 and the Comets started to shine bright again. The Comet defense displayed their strength as they kept the Greenies from scoring in the third with big sacks from Moses Clark and Josh Tamplain to maintain the 14-7 score with the Greenies still in the lead.

The Comets held fast in the fourth quarter, keeping the Greenies from making the big passes and runs that allowed them to score in the first quarter. After many attempts to score the Greenies attempted to kick a 42-yard field goal, but it was blocked by Jermaine Rousell, and the Comets gained great field position at the 47- yard line.

The Comets steadily moved the ball up to try to score to make it a tie game, but the drive was halted when Newman’s Sterling Scott intercepted the ball with less than two minutes left in the game. The Comets fought considerably hard and stopped Newman from scoring for three quarters, which displayed great fortitude and determination.

The Comets will play another strong team on Friday when they meet up with South Plaquemines.