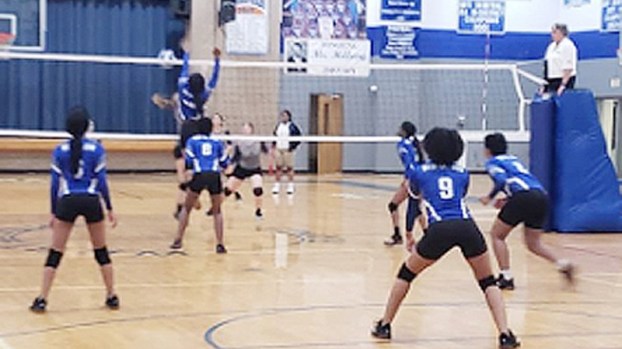 EDGARD — Football is usually the big sport that symbolizes the beginning of the school year for high school sports. But, over in Edgard, the West St. John Rams girls’ volleyball team will not be overshadowed.

The girls have been working out just as hard, preparing for the hopeful start to a fantastic year. West St. John’s Coach Tahajenik Melancon feels it’s going to be a great year.

“When we do get to practice, we do what we can do, focus on what we need to focus on and get along that way. We have some parents who are trying to keep their children safe, understandably, and therefore it does get hard sometimes, but we get it going,” Melancon said. “We still split the girls into groups and practice on basics. Yes, it’s a little difficult not being able to get close or even have them all together. We try our best to get it done!”

This year’s squad is the largest Melancon has had in her five years of coaching, and she is extremely excited.

“This year, I have 17 right now, which is rather large for a small school. I see a big difference in the squad this year from last,” she said. “I have a great deal of fresh, raw talent coming in. Many of the new girls have awesome attitudes, they’re eager to learn, and are very coachable kids. I feel this year will be my best year yet, mainly because it is a bigger squad and I can rotate more girls in and out.”

Melancon said this helps eliminate players getting tired and allows them to get rested. It’s easier than having a small team, where players end up exhausted from being on the court the entire game.

The two seniors on the team are anticipating having a phenomenal year, even if the start date is uncertain.

“Although I think the season may be postponed, I don’t believe it will be cancelled. So, I’m looking forward to developing the new talent coming this way. I feel really good that this year will be a great year as well as building for next year,” Melancon said. “I see my seniors doing fantastic things this year as well as players stepping up and making this team one of the best in the River Parishes.”

Be on the lookout for these amazing girls as they hope to do mighty things this year in volleyball!

RESERVE — Scholar athletes at East St. John High School prove its possible to have brains and brawn. Many of... read more