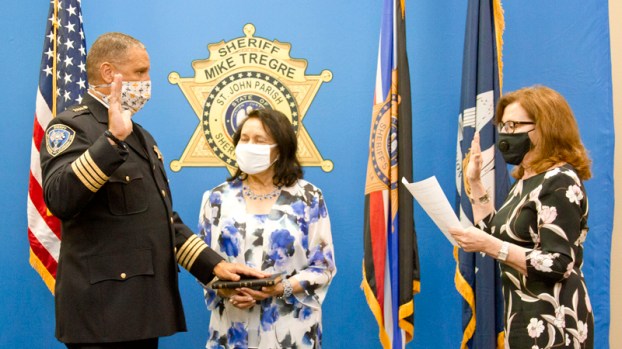 LAPLACE — The beginning of Mike Tregre’s third term as St. John the Baptist Sheriff started the same as the last two — with a swearing in by Judge Mary Hotard Becnel.

A small inauguration ceremony was held last week at the La Nard Robinet Multi-Purpose Room in LaPlace. Tregre once again took an oath to support the Constitution and laws of the United States and Louisiana in his mission to protect and serve the St. John the Baptist Parish community.

Becnel said it was an honor and delight to swear Tregre in for another term.

“I met him when I was campaigning for my first election, and I was so impressed with him that I told him, ‘You are going to be the sheriff one day’,” Becnel said. “He told me, ‘When that happens, you’re swearing me in.’ This is now my third time.”

Tregre was baptized by fire after his first inauguration as sheriff in July 2012. Within a month, two St. John Parish deputies were killed in an ambush-style shooting. Hurricane Isaac devastated the community with widespread flooding only weeks later. 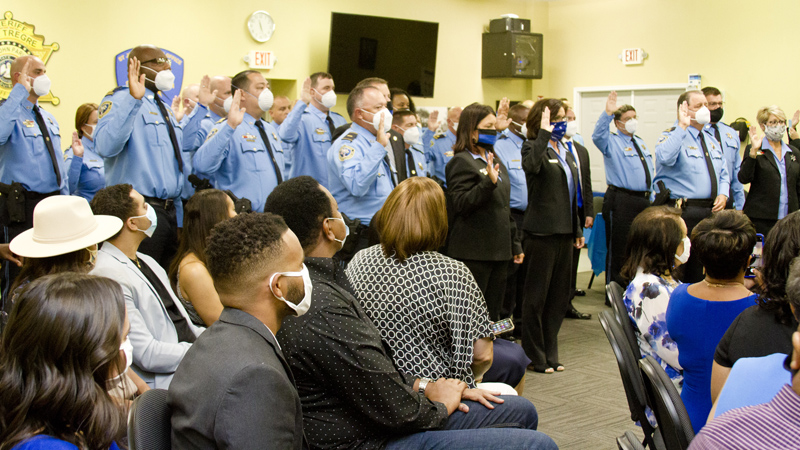 Several members of the St. John Sheriff’s Office took oaths and were sworn in as deputy sheriffs in charge of running their departments effectively and efficiently.

“At the St. John Sheriff’s Office, we have been tested with hurricanes, floods, tornadoes, officers being killed, lawsuits,” Tregre said. “With all of those things that occurred, we rose above it all, and we continue to become one of the best law enforcement agencies of Louisiana.”

Since 2012, Tregre has made CPR certification mandatory for every officer, implemented random drug testing and sent officers to receive cultural and sensitivity training. He has instituted a Citizen Review Board where graduates of the SJSO Citizen’s Academy can sit in on disciplinary board hearings for officers under review.

Tregre has always maintained the importance of continuous training, and that focus will continue into his third term.

The Lloyd B. Johnson Training Facility under construction on Cambridge Drive in LaPlace is among the projects currently in the works. This will promote continuous training by allowing instructors to travel to St. John Parish and offer classes. This will decrease travel expenses associated with flying officers to classes across the country.

Now that the Mississippi River levels are receding, construction can resume on the West Bank Public Safety Complex. The $2 million complex is a joint venture between the St. John Sheriff’s Office and Fire Department to increase police, fire and medical presence on the West Bank.

The 6,000 square foot building features bays for housing trucks and equipment, a conference room, office and sleep quarters, as well as a reception area, day room, kitchen, restrooms and a break area.

“This building will be the first of its kind on the West Bank to provide citizens with the services they need and deserve,” Tregre said.

There are also plans to add a wing to the Sherman Walker facility during this term to house juvenile offenders and mentally challenged inmates.

“A lot of things people are saying police officers need to do, St. John Sheriff’s Office is already ahead of the curve when it comes to building relationships with our community,” Tregre said.“I want to thank all the officers who have continued to stand with me during these troubled times.”

During the inauguration, every officer in the room was sworn in as a deputy sheriff. Tregre challenged each one of them to accept the role of commander and continue running their departments effectively and efficiently.