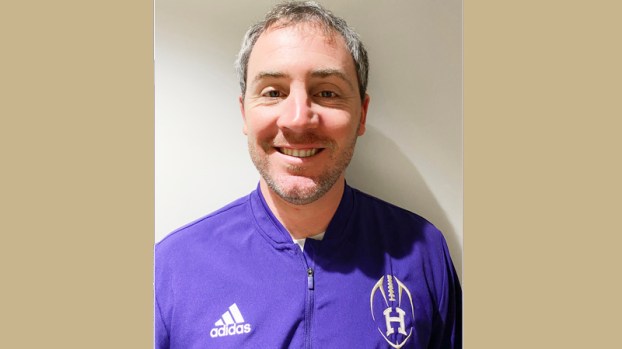 HAHNVILLE — Hahnville High School has found its next football coach from within. Offensive coordinator Daniel Luquet was chosen among 20 applicants to lead the Tigers in the 2020 prep football season.

While the position was finalized Wednesday evening with a vote from the St. Charles Parish School Board, Luquet got the greatest birthday present when he was surprised with the job offer last week.

He had already endured two rounds of interviews and didn’t sleep a wink the night before what he thought would be his third interview for the job. When Hahnville High School Principal Brian Lumar offered him the job, he came downstairs to a cheering team of supporters. His mom, dad, stepmom, sisters, wife and daughters were in on the surprise and waiting to celebrate with cake and champagne.

“I want to be a part of the community – not just the guy who is the football coach but someone who can change the lives of the young men I coach,” Luquet said. “I think building the character of young men will allow us to achieve what we want to achieve on the football field.”

Luquet started his career as an assistant coach at his alma mater, Destrehan High School, where he once led the football team as quarterback. He stayed there for six years before moving to Woodlawn High School in Baton Rouge. He spent four seasons as a head coach and produced an 18-25 record with the Panthers.

Last year, he landed at Hahnville as the offensive coordinator. He sees his new head coaching position as a long-term role, something he would gladly do for 20 years or longer.

“I live in Luling. For my family, this is where our life is and where our home is,” Luquet said. “This is the community where our kids will grow up and the school system we want them to attend.”

It also helps that the River Parish football talent is off the charts and the community is second to none.

“It’s the amount of passion that you get not only on a Friday night, but on a Saturday morning in the grocery store when you’re talking to fans or alumni,” Luquet said.

This year’s football squad may be young, but Luquet said the team is equally athletic, smart and physical.

“On the offensive side of the ball, everything starts with the quarterback,” Luquet said. Andrew Naquin is returning for his senior season to lead the offense, which will be strengthened by four returning starters.

Landen Zeringue, a former tight end moving to the opposite side of the ball, will join Reginald Pierre, Micah Roshtro and Jarian Shelby on the offensive line.

The Tigers have some explosive weapons on the outside, including Corey Lorio, Troy Kendrick and Dakota Williams.

Big leaders on the defensive side will include Devontez Simmons, Alijah Hamilton, Shamarr Moses and Chris Scott, who are all returning with a significant amount of experience and playing time.

Workouts could begin as early as June 8 but will ultimately hinge on guidance from state and local officials.

“We have a priority to make sure out student athletes are safe,” Luquet said. He added that, just like his own children, his team will always be part of his family.

Coaching is also part of Luquet’s family. His father, Marty Luquet, led the Destrehan High School baseball team for many years and now serves as an assistant coach at Riverside Academy.

Marty is eager to see what his son has in store for the Hahnville Tigers.

“I am so excited to see what he can do with a program that can match up athlete for athlete with any team in the state,” Marty Luquet said. “As a proud father I’m excited to see him with a quality team in a parish where he grew up and I made my name. Hahnville is getting a great leader and a great person.”

Daniel Luquet grew up on a baseball field, watching his dad build unbreakable bonds with the athletes he coached. Now he looks to his father as a coaching inspiration.

“The impact he made on people in all of his years in coaching is something I strive to do,” Luquet said. “If I have the ability to touch the lives of kids as he did, then I’ve done my job.”

NORCO – Hunting and fishing fanatic Blake Phillips has made more than a few trips to Metairie to gather supplies... read more