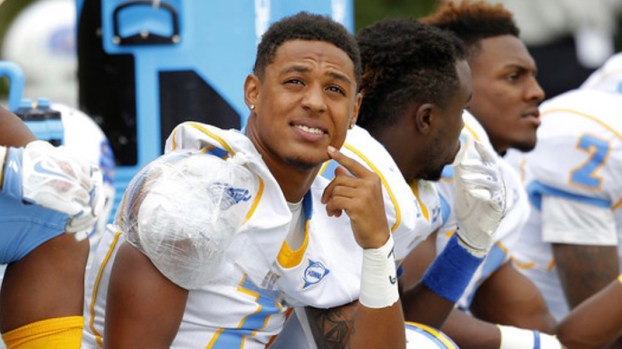 EDGARD — Austin Howard might never have gone to college or even picked up a football if it weren’t for the supportive team of coaches at West St. John High School.

But long before that, back when he was in eighth grade, Howard wasn’t a football guy at all.

Coach Robert Valdez, head coach at the time for West St. John, stopped Howard in the hallway and told him he was going to be his quarterback next year.

“He didn’t really give me an option,” Howard recalled.

Juan Joseph was Howard’s quarterback coach from sophomore through senior year, and he carried the wisdom of life lessons that extended far beyond football. The two spoke on the phone the night Joseph was killed by a gunshot in Baton Rouge in 2014. In his final hours, Joseph comforted Howard after a difficult football game.

Juan Joseph’s younger brother, Dray Joseph, was another football inspiration. Howard followed in his footsteps as a quarterback, first at West St. John and then at Southern. Howard joined the Jaguars as a freshman in 2014, just one year after Dray helped lead them to a championship as a senior.

Howard started summer school at Southern University weeks after his high school graduation. During training camp in July, he was fourth in the depth chart, behind other quarterbacks. He didn’t give up on his chance to play as a freshman, and by September, he’d moved up to No. 2 in the depth chart.

His first collegiate game was against University of Louisiana at Lafayette. It was a hard loss for the Jaguars, but Howard managed to score the only touchdown of the game.

Howard’s most memorable games at Southern, in no specific order, were against Grambling State (the Bayou Classic), Jackson State and Alcorn.

“I liked playing away,” Howard said. “I liked seeing how fans could make the away stadium our stadium. The Jaguar nation followed us everywhere. Even to Georgia. Baton Rouge isn’t that big. I had to be the quarterback 24/7. If I would go to the grocery store, someone was going to know me.”

“He was really big on telling us to stop controlling things you can’t control,” Howard said. “Just don’t be stagnant. You either get better or you get worse.”

Howard took his football journey full circle after college when he saw coach Valdez at his cousin’s graduation party in summer 2019. Within a week, he had a new assistant coaching job at St. James, and the 2019 season was a wild ride straight to the championship title.

Rival schools or not, Howard would have followed Valdez anywhere.

“He never failed me once in my life,” Howard said. “He was so loyal to me. It’s only right for me to be loyal to him, and I wouldn’t want it any other way.”

After Howard joined the Wildcats program, Valdez told L’OBSERVATEUR, “I didn’t need a resume. I didn’t need anything. All I needed was a phone number. It just was a situation where, for us and our program, it helps us. I’m not getting any younger so it’s always good to get good young people in, who have had recent success.”

Another member of the St. James coaching staff, LaVanta Davis, was at West St. John during Howard’s high school career. Howard described him as intelligent and a strong mentor.

“I don’t ever want to take credit for my success because it wasn’t just me,” Howard said. “If it wasn’t for Robert Valdez telling me I was going to play football, I would have never played football. Before anything else, I have to thank God for giving me the ability to walk, talk and think for myself.”

EDGARD — Last week’s match-up between West St. John and Delta Charter ended in a 64-57 victory for the Rams,... read more